The Jefferson Club was sponsored by the Burkittsville Ruritan Club and chartered on December 20, 1955. A total of 79 members signed the charter to form the club. The first officers were Ira C. Rice, President; Robert Hemp, Vice President; Frank Baker, Secretary; Jack Lakin, Treasurer; Rudolph Lovell, Richard Cox and William Hemp, Board of Directors.

The first regular meeting was held on January 18,1956. The club sang America and Reverend Calvin Moreland offered the invocation.

Some of the projects have included a trash disposal plan for the community, blood donor program, construction of the Jefferson Youth League diamond, work with the Jefferson Boy Scouts, donations to the street light fund, restoration of Gathland State Park. The members established a “pig chain”, holding annual family picnics, sponsored a water and sewer survey, held seasonal parties for the high schools fund raisers for bands and football teams and helped the disabled, needy and sick.

The Ruritan Club sent members to the University of Maryland Firemen’s Training School and sponsored and procured the first fire engine for the community.

In 1957, the Ruritan Club held its first carnival on the grounds of the Jefferson Elementary School (at Lander Road and Maryland Route 180). The carnival is now held on five acres of ground purchased from James Ingram and now houses the Jefferson Ruritan Center and the Jefferson Volunteer Fire Company. The first building was a fire station, built by the members in 1967 to house two fire trucks. The present community building was constructed by the members and dedicated in November 1968.

Twice a year since 1962 the men butcher 10 to 30 hogs with the meat sold to the public (except for the hams which are cured and used for sandwiches at the carnival and other Ruritan functions).

In 1972, Dan Poole’s committee organized the first tractor-pull at the Frederick Fair Grounds. This was so successful it was held again the following year in 1973 and 1974. The 1974 event attracted over 3000 spectators.

The bicentennial of Jefferson was organized by the Jefferson Ruritan Club and held in 1974. A large parade kicked off the events leading to a large festival held on the Ruritan grounds. The weekend was concluded with fireworks. Many of the same events were the basis for the 225th Celebration in 1999.

The club offers graduating seniors in the Jefferson district an opportunity for a scholarship to assist with the cost of pursuing higher education. The fund was started in 1977 and has awarded an average of three scholarships annually to qualified students, ranging in amounts of $500 to $1000. Over 60 graduates have benefited from the scholarship program.

In 1982 the club assumed the responsibility for the town’s streetlights. An annual community supper is held to raise money for this project.

The club entered into an agreement with the State to enlarge the parking lot to accommodate 50 vehicles for a Park n’ Ride project.

A large playground was renovated in 1988 with the purchase of new equipment purchased and installed by the members. Funds were supported by a grant from the Frederick County Parks and Recreation.

The Club sponsored the Lewistown Club, has had several of its members serve as Zone Governor and has won many district and national awards for community service.

The 1990’s saw the membership reaching the 100 mark, which makes the club on of the largest Ruritan Clubs in the nation. Members continually strive to be responsible to the community, working together to make Jefferson a great place to live. Whether it be purchasing and installing a new furnace for a senior citizen on limited income, lending convalescence equipment to the sick and aged or providing funds to local schools the Jefferson Ruritan Club continues its tradition of community service and seeks new ways to serve. 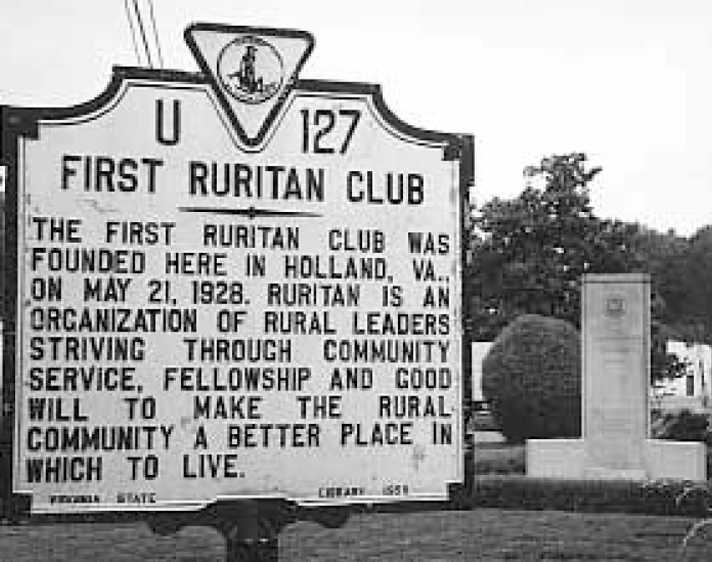